Treating hemorrhoids is so simple

There is a disease that makes people suffered in the world.

"It" has a very high incidence, which can make people feel painful and unhappy;

"It" can easily cause many diseases, such as anemia, and even cover up the symptoms of rectal cancer;

"It" is an unspeakable concealment, so many people, especially women, would rather be patient than go to the hospital. 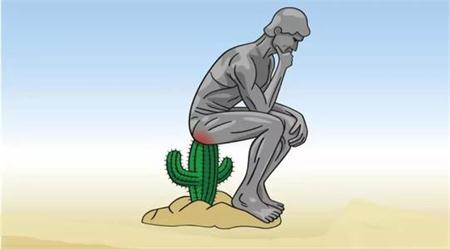 It is embarrassing hemorrhoids!

It is said that if there is a will, everything will happen, but what about the "hemorrhoids"? I'm afraid it's impossible.

I believe many friends who have ever experienced hemorrhoids was a history of tears and bloods.

A "Chrysanthemum Terrace" dedicated to those suffering hemorrhoids

The chrysanthemum is broken, the floor is hurt, and your smile has turned yellow...

How does it feel to have hemorrhoids? That's so sour...

Some factors that cause increased abdominal pressure, such as constipation, physical exertion, pregnancy, etc., can cause or aggravate hemorrhoids.

The symptoms of hemorrhoids are mainly as follows

2. Pain. When the hemorrhoids are prolapsed and incarcerated, edema or infection occurs, the local pain is severe. Or thromboembolism in external hemorrhoids can cause severe pain.

3. Itching. Itching around the anus, and even skin eczema.

According to the patient's symptoms, internal hemorrhoids have the following stages. Come, children who are in difficulty, compare themselves to what extent.

Bleeding during defecation, the bleeding can stop automatically after defecation, and the hemorrhoids will not come out of the anus;

There is often blood in the stool, prolapsed from the anus during defecation, and automatically repaid after defecation;

Occasionally, hemorrhoids prolapse after going to the stool, weight bearing, or fatigue, and need to be assisted by hand to repay the hemorrhoids;

Occasionally, there is blood in the stool, and the hemorrhoids stay outside the anus for a long time and cannot be repaid, or hemorrhoids come out after replenishing.

How is hemorrhoids generally treated?

With the rapid development of modern medicine, medical scientists have not only found the root cause of hemorrhoids, but also realized their desire to treat hemorrhoids painlessly through modern minimally invasive techniques. With the continuous development and application of modern endoscopy, digestive endoscopy has become an indispensable tool for daily diagnosis and treatment of gastroenterology, and it has also caused revolutionary changes in the field of surgery. The development and application of endoscopic surgery has made the treatment of many diseases of the digestive system "minimally invasive", gradually replacing some surgical operations, so more and more patients and doctors have affirmed. The treatment of internal hemorrhoids through endoscopic injection of sclerosing agent, as a revolutionary new therapy, completely subverts the traditional surgical treatment.

The most widely used sclerosing agent in clinical practice is the domestic lauric alcohol injection. By injecting lauric alcohol sclerosing agent into the blood vessel, it destroys vascular endothelial cells, activates the internal and external blood coagulation pathways, promotes local thrombosis, and blocks the expanded hemorrhoidal blood vessels. In addition, the sclerosing agent injected into the submucosa can also stimulate the formation of aseptic inflammation in the surrounding tissues, promote the proliferation of fibrous tissue, and then fibrosis, which plays a role in local fixation.

Studies have shown that the first-time success rate of the treatment of grade I hemorrhoids with latinol can reach 88%. A study of patients with grade II and III internal hemorrhoids showed that the success rate of endoscopic sclerosis can reach 95.8%, and the 1-year recurrence rate is only 8.3%. The function of rectal mucosa and anal cushion is protected to the greatest extent by injecting cinnamyl alcohol sclerosant. It has a very significant effect on the treatment of internal hemorrhoids of third degree and below, and effectively cures the symptoms without destroying the anatomical structure. Alleviate the condition and achieve the effect of real minimally invasive treatment. This shows that lauroinol sclerotherapy is gradually becoming a more minimally invasive, safer, and more precise treatment.

1. Colonoscopy can be completed at the same time before treatment to exclude other colorectal diseases that are easily confused with hemorrhoids, which can effectively prevent missed diagnosis!

2. Clear surgical vision and precise injection of hardener! The symptoms are relieved significantly and hemorrhoids are eliminated!

Endoscopic sclerotherapy of internal hemorrhoids has satisfactory results and high patient acceptance. It has been clinically promoted in many domestic hospitals and has become the first-line treatment for hemorrhoids in stage 1, stage II and stage III! ! !

Every person with hemorrhoids has a bitter tear. I couldn't sit securely, I couldn't sleep well, even when I went to the toilet, I was trembling, and I was afraid of bleeding and coming out. It was even slightly embarrassing to mention it to outsiders.

In fact, this is really nothing, it's just a problem that many people will have. As long as you pay attention to it and follow the doctor's instructions honestly, the small chrysanthemum can still bloom like a sunflower. Therefore, it is the most correct choice to seek medical treatment in time, listen to the doctor's advice, develop good living habits, and choose the most suitable surgical treatment plan.